Copywriting to Abstract and Concrete Thinkers 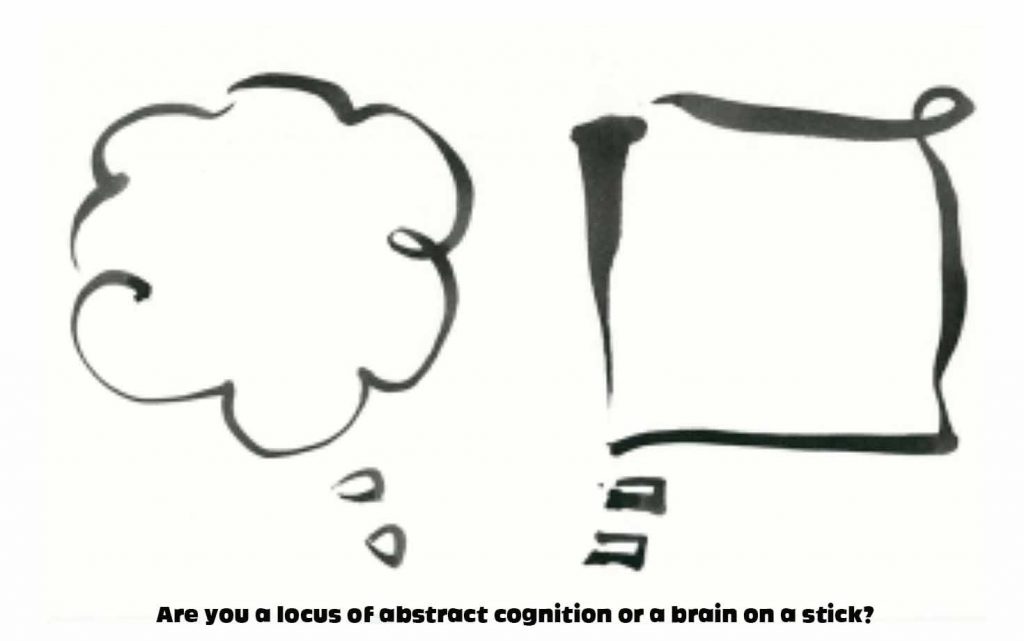 The caption in this pic is taken from Steven Pinker’s book, The Better Angels of Our Nature in which he writes, “A person is not a locus of abstract cognition (a brain on a stick) but a body with emotions and a part of the fabric of nature.” (Page 186). The abstract/concrete parallel in this sentence nicely illustrates the topic of this post – that our english can come across as utterly greek or plain cold-blooded if we don’t stop to consider who it is we’re communicating with, and what form your ideas and messages can take in their mind.

In his landmark study into human thought processes from childhood to adulthood, developmental psychologist, Jean Piaget, found that 80% of the population were concrete thinkers and the other 20% were abstract thinkers. Since the 1980′s, scientists suggest that the abstract figure is closer to 15%. This is a significant statistic … and this here empty sentence is written to give you some pause for thought before we look at the implications of this for us as writers.

This 85/15 statistic also explains why accomplished copywriters are on the same page as novelists and poets. That old copy room catch-phrase “write pictures” is a simple (and concrete) expression of understanding the human mindset, even if Piaget was never on our bookshelf. Our own daily experience informs us of the engage-ability of concrete narrative versus the abstract. It’s easier to understand when we read sentences that make us “see” the idea being expressed.

But vision is just one of the suite of senses that enable us to experience the world and receive ideas. There’s sound, taste, touch and smell. Depth psychologists would also add a sixth sense – insight.

For the writer, the palette of writerly colours include writing sound:
The car screeched to a halt.

You might want to emphasise the length of the screech and add a bit of smell to it:
The car screeeeched to a rubber burning halt.

Metaphor (“writing is the sound of your mind in ink”) and similes (“like sandlewood incense and clear water”) also help us understand through comparisons with concrete imagery.

The more explicit or specific you are, the sharper you bring into focus the idea being communicated. Which brings us to the Ladder of Abstraction popularised by teacher and writer, Hayakawa in his book, Language in Action. His ladder identifies four levels of meaningfulness. At the top of the ladder are abstractions and at the bottom are concrete, identifiable nouns. Note how the title, Ladder of Abstraction, expresses this idea with its two nouns: the first “ladder” is concrete. You can see it, hold it, and climb it. It involves the senses. The second noun “abstraction” is just that, you can’t see it, smell it, feel it, hear it or taste it. It is an idea that does not appeal to the senses but to the intellect, and hence needs to be explained.

The Ladder of Abstraction

Depending on how focused you want your reader to be, you can go even more specific by writing Toyota Camry; Aung San Suu Kyi, General Secretary of the National League for Democracy; six year old Catherine from St Judes in Moshono Tanzania; Logie; dim light; Casuarina.

There is no abstract bad, concrete good. Accomplished writers know when to move up and down the ladder of abstraction. The more conscious you are with your choice of words, the more effective you can become as a writer/communicator.

Just be careful of your motivation.

If in the beginning was the word, then your choice of them is a matter of social responsibility. It not only enables clear, concise and compelling communication but also determines perception. This is a matter of another post, but let me just illustrate the power of words in shaping our perceptions. One of my Clear Writing students wrote a report on researchers from Monash University who found that public perception of asylum seekers is strongly influenced by the media’s choice of provocative words that label people. Words like “Queue jumpers”, “Boat people” and “Illegal immigrants”. Provocative and concrete.

It’s a cautionary conclusion to the persuasive power that is the sound of your mind in ink.