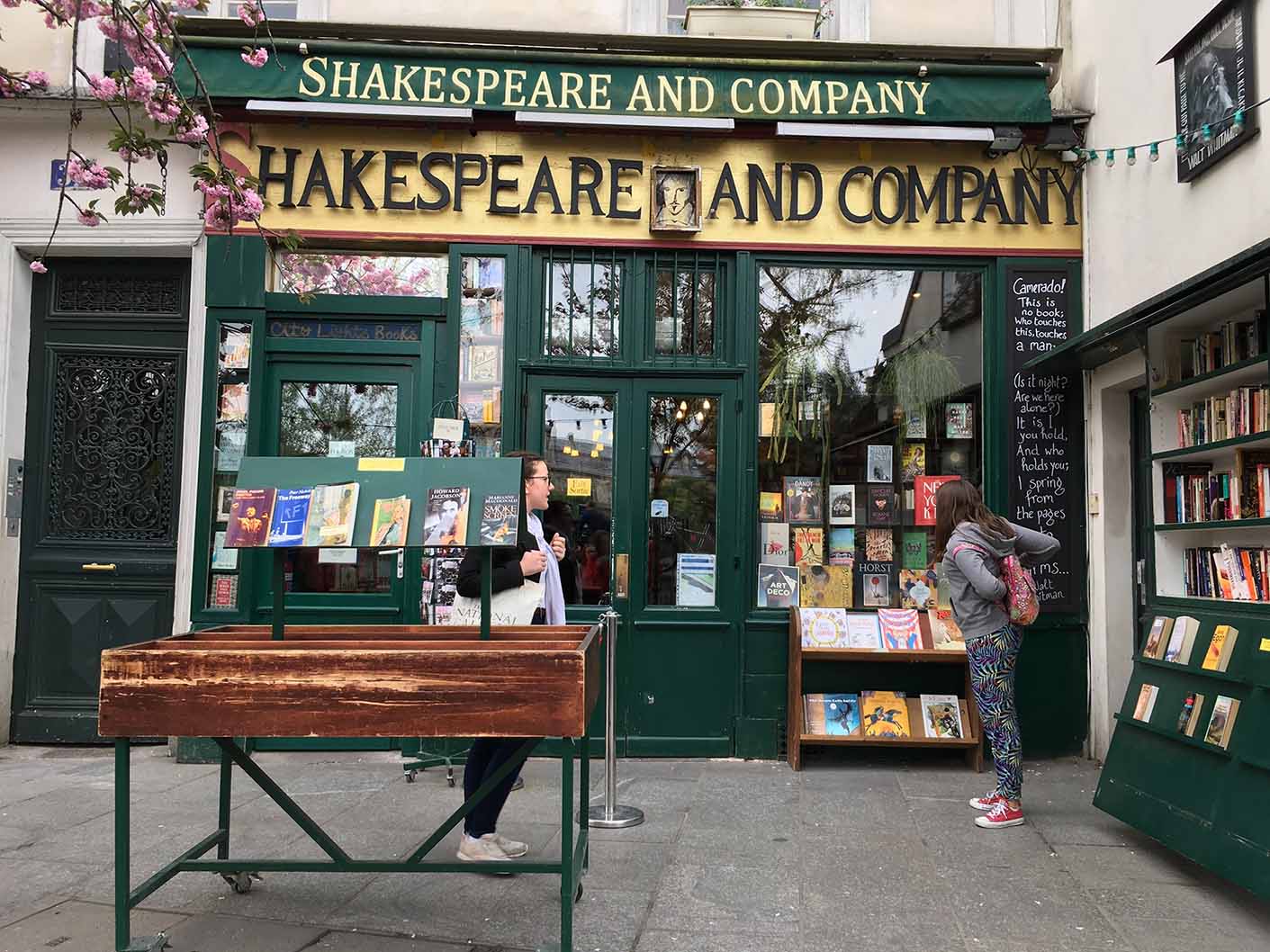 Verb: To Create a New Word

Are you al desko (overworked)? Perhaps you’re hangry (bad-tempered as a result of hunger). Or could it be that you’re still thinking about that rando you met the other night (Someone so unknown to you, that you cannot figure out why he or she is involved in the same social activity as you, but it was great to have them)? If so, you might still feel a bit jiggy about them (sexually aroused)? These are just some of the newly invented words in the 2015 edition of the Oxford dictionary, continuing a long tradition of an ever evolving English language.

William Shakespeare was such a prolific innovator of the written word, he created somewhere between 1,700 and 2,200 words — even more according to a New York data scientist who counted 5,170. Whatever the number, Shakey wordeated by changing nouns into verbs; changing verbs into adjectives; connecting words never before used together; adding prefixes and suffixes; as well as inventing completely original words. Below is a cloud of a few of these words, hyperlinked to the source play and scene: 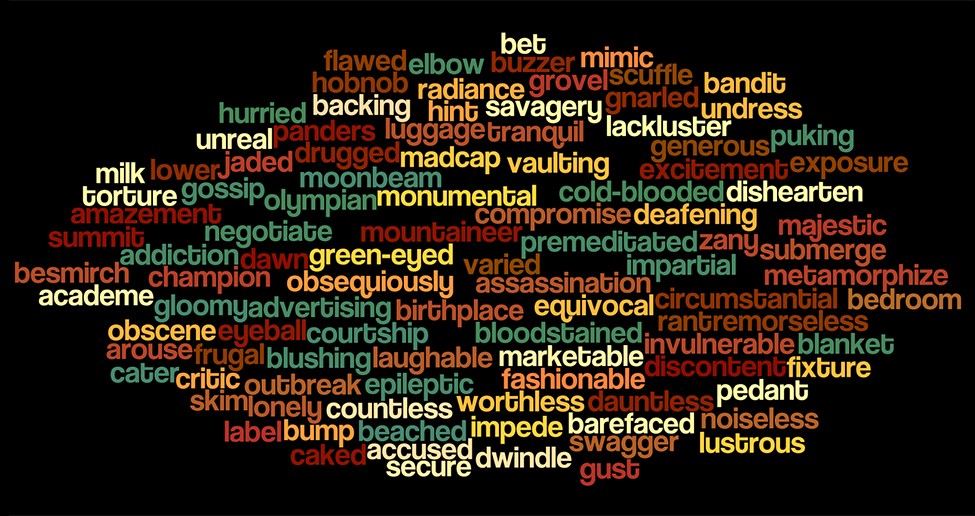 As you can see from this tiny selection, we scribes of the English language (engscribes?) owe a massive debt to the wordsmith known as Shakespeare. But he wasn’t the first to invent words (just the most prolific — until Hip Hop took the mic, but that’s another story). If you haven’t already seen Melvyn Bragg’s epic documentary, The Adventures of English, it’s a fascinating story of a language that’s been evolving since its arrival in Britain as a minor Germanic dialect in the 5th century.

Every year since then, new words have continued to be introduced into the English language. While some fade out as quickly as they are uttered into existence, others stay to become part of the expanding universe that is the English language. Here are a few Oxford added to their online dictionary in 2015 alone:

Some of the many thousand invented words by Hip Hop artists have also been immortalised by the Oxford dictionary:

Now why would you want to make up words to use in your copy when Shakespeare and the Oxford have done all the work for us?

The answer is, why not if it gets your reader to stop in their eye-tracks or stay readified in your story. Strange words have a way of arresting attention, especially when it comes to the main attraction — the headline.

Have a look at the following five ways Shakey invented words, and see how you too can invent your own.

Friending, trending, evidencing, statementing…so many nouns are turning into verbs these days. Mothers and fathers now parent. Reviewers now critique films. Just about everybody Googles. And now you can table an idea, shoulder the blame or action a request. From tasking, impacting, efforting to accessing, progressing and transitioning, we are literally being verbed into the here and now. According to The Economist’s Intelligent Life magazine: ‘the English language is in a constant state of flux. New words are formed and old ones fall into disuse. But no trend has been more obtrusive in recent years than the changing of nouns into verbs’.

Verbing (denominalisation in grammar-speak) is nothing new. In his book The Language Instinct (1994) Steven Pinker points out that:

‘Easy conversion of nouns to verbs has been part of English grammar for centuries; it is one of the processes that make English English. Elizabethan writers reveled in it: Shakespeare’s Duke of York, in Richard II (c1595), says “Grace me no grace, nor uncle me no uncle”, and the 1552 Book of Common Prayer includes a service commonly called “the Churching of Women” ‘.

While purists may protest against the whole business of verbing, others are happy to follow Shakespeare’s vibrant linguistics — ‘I’ll unhair thy head!’ warned Cleopatra. ‘The thunder would not peace at my bidding,’ bemoaned King Lear.

If a word modifies a noun or pronoun, it’s an adjective, even if that word is usually associated with a different part of speech, such as verbs:

A rolling stone gathers no moss.

Sometimes the past participle form of a verb becomes an adjective:

I will accept a written apology.

When you filter your water, you can enjoy filtered water. And if your companion snores while they sleep, you can kick him without fear of violating some law against assaulting snoring people. However, you would be well advised to never kiss a smiling crocodile.

These are just a few adjectivised verbs that originated from Shakespeare’s imagination for wordeation.

Connect words never used together before

Shakespeare was a master at matchmaking words into a marriage of eloquence. Connecting words into compounds would have to be the simplest way to make up new words. But it’s also a lot of fun. Here are some modern examples:

The standard linguistic term for this type of wordsmithing is portmanteaus (coined by Lewis Carroll in Through The Looking Glass). This is a method by which the writer blends the sounds and meanings of two words. You see this style in new words like:

As a matter of fact, portmanteau itself is a blended word, originating from the French portemanteau, formed from porter (to carry) and manteau (cloak).

Shakespeare was equally adept at agglutinating parts of speech and created these:

Invent the word you need

Certain words just come — out of nowhere. It takes creativity and often courage to invent a new word. Here are just a few with their origins in parenthesis:

once a wanton playground for every manner of sexual ecstasy

It is Othello’s pleasure, our noble and valiant general, that, upon certain tidings now arrived, importing the mere perdition of the Turkish fleet, every man put himself into triumph; some to dance, some to make bonfires, each man to what sport and revels his addiction leads him. – Herald; Othello, Act II, Scene II

His captain’s heart, which in the scuffles of great fights hath burst the buckles on his breast, reneges all temper, and is become the bellows and the fan to cool a gipsy’s lust. – Philo; Antony and Cleopatra, Act I, Scene I

What hempen home-spuns have we swaggering here, so near the cradle of the fairy queen? – Puck; A Midsummer Night’s Dream, Act III, Scene I

Where is our usual manager of mirth? What revels are in hand? Is there no play to ease the anguish of a torturing hour? – King Theseus; A Midsummer Night’s Dream, Act V, Scene I

If it were done when ’tis done, then ’twere well it were done quickly: if the assassination could trammel up the consequence, and catch with his surcease success. – Macbeth; Macbeth, Act I, Scene VII

So next time you’re stuck for words, maybe you could wordeate using the techniques above.

We can all be wordeators.

Meanwhile, my online copywriting course timetable is ready to take your enrolment now.