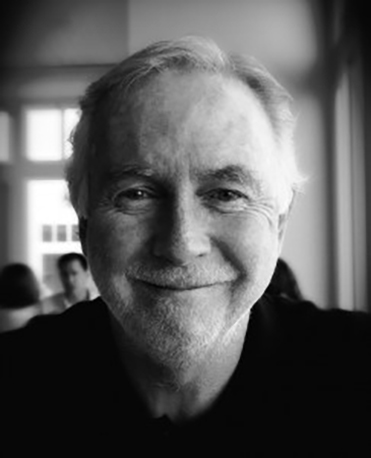 One of the most important steps toward greatness in anything you do is to work with the greats. Get their feedback. Take their advice. And most importantly, see how they do what they do. But for most of us, such encounters of the third kind are not so possible.

Last week I made this possible by introducing you to one of Britain’s most renowned copywriters, David Abbott; this week let me introduce you to one of Australia’s, John Bevins. His agency spent 28 years creating breakthrough campaigns for Tourism New Zealand, Anti-drink driving, Bankers Trust and MBF Health Insurance. All of which were showered with awards around the world. In fact, John Bevins Pty Ltd public awareness campaigns for road safety and Quit For Life anti-smoking demonstrated such enormous potential of advertising as a positive force that they were adapted for use in other countries including the USA.

So what takeaways from this master copywriter can you apply in your daily writings? Let’s find out by unpacking some of his mantras.

Let’s begin with a masterpiece by Rembrandt and the MBF ad that wrote itself. This is a fine example of investigative copywriting by which I mean researching and sleuthing about the subject until the story reveals itself. And more often than not, this is in a detail that everybody else misses or dismisses. John Bevins demonstrates this point clearly, ‘Copywriting has taught me that you don’t write great ads, great ads write themselves. All you need to do is dig relentlessly for gems in the most unlikely of places’. He describes this process of investigation beautifully with the MBF project which had a screening mammogram clinic that nobody knew about. ‘Dr Joan Kroll, who ran the clinic, mentioned to me in passing a painting depicting breast cancer long before it was discovered by medicine. Professor Michael Baum, from the Rayne Institute in London, uses it in his lectures, she said. I called him up that night. “Ah, Bathsheba at her Toilet, you know it of course, by Rembrandt?” I didn’t, but once I saw it, and learned its story, I knew we had an ad’.

Stop here and take a minute to read this ad. It sheds a whole new light on Rembrandt’s Bathsheba that perhaps not even Rembrandt himself was aware that he was capturing. 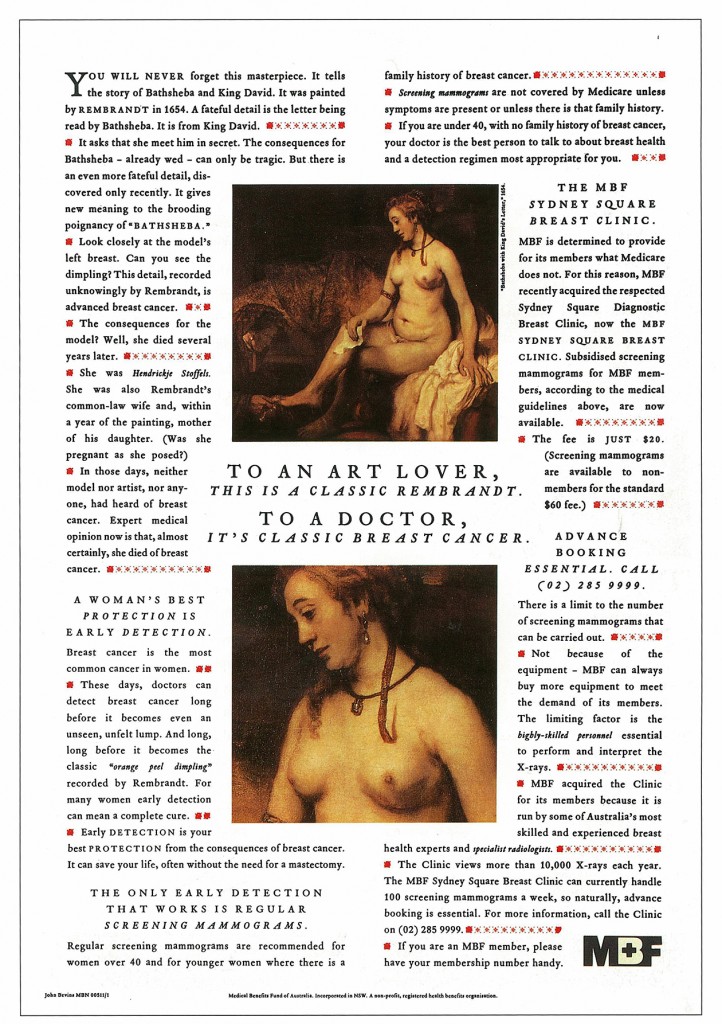 You don’t have to wait until you have fully mastered the craft to write something of this standard. It’s all in the attitude you take to the job. A useful mantra for this attitude is story, meaning, value. Bevins sums up this attitude as: ‘enriching the reader enhances the readership. This ad showed the value of talking up, not down’. What he did was turn data and information (research) into knowledge and insight (writing), treating his reader as an intelligent human being rather than a marketing demographic.

Participants in my copywriting courses make it abundantly clear that finance and insurance are two of the most unpopular subjects to write about. ‘Dry’, ‘dull’ and ‘unexciting’ are often uttered, and in tones that match those words. Consult John Bevins on these expressions of apathy and he would tell you that ‘if you don’t enjoy writing it, no one will enjoy reading it’. A sure way to generate enthusiasm for a topic (any topic) is to get to know it and the target audience inside out and look for the insight. The word ‘enthusiasm’ comes from the Greek enthous, meaning ‘possessed by a god’ and that god is the insight. An insight ignites great story ideas like the previous Bathsheba and the following Swedish Chimp. Suddenly, an insurance and finance story becomes a fascinating read. 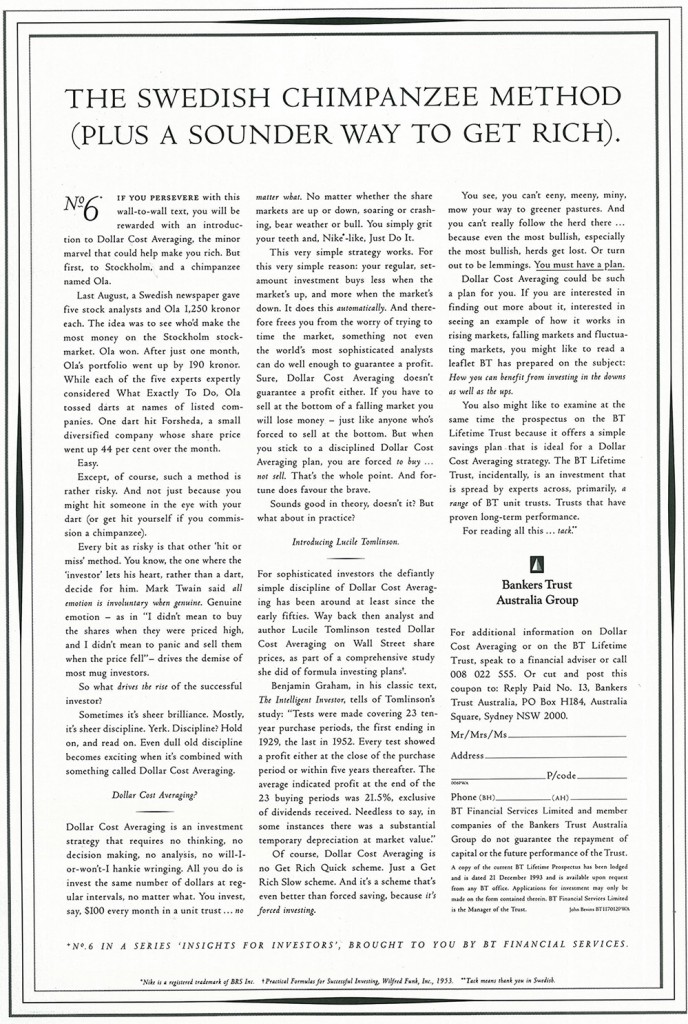 Mantra #3 — When the brief is inadequate, follow your instincts.

Warning! This mantra is a dangerous idea, and perhaps only Bevins’ New Zealand Tourism ad can prevent a detour from the brief turning into “a car crash” to quote Strategist, Kirsty Muddle in The Meaning Maker. As Bevins explains, had he ‘slavishly follow[ed] the flawed brief from the market researcher — “Australians think New Zealand is sickeningly wholesome, so make it a little bit wicked” — I’d never have gone to Queenstown and wandered aimlessly around the back streets looking for… what?

Note that the brief was “flawed”. Note that he didn’t just accept it and sit at his writing pad waiting for the inspiration to come from out of the blue and into his frontal lobe. He followed his instinct to find the truth of the story. That took him to New Zealand. It might just take you to Ballarat. To quote John Lennon, ‘reality leaves a lot to the imagination’ and you just have to look around and observe. If you’re in a similar brief-poor situation, with no chance of reviewing and revising the brief, then that is a sure sign to get up, get out and follow your instincts. This circles back to mantra #1 — research research research. In Bevins case, he strolled around the streets of Queenstown and found the idea screwed on a gate. His paranoia-free concept ‘inspired a campaign for a country you could never make even a tad wicked, a campaign that achieved in months the result the client had expected would take years’ said Bevins. The headline says it all, and the copy unfolds a fascinating aspect of New Zealand that is not only a convincing call to action but a wonderful tribute to New Zealanders. 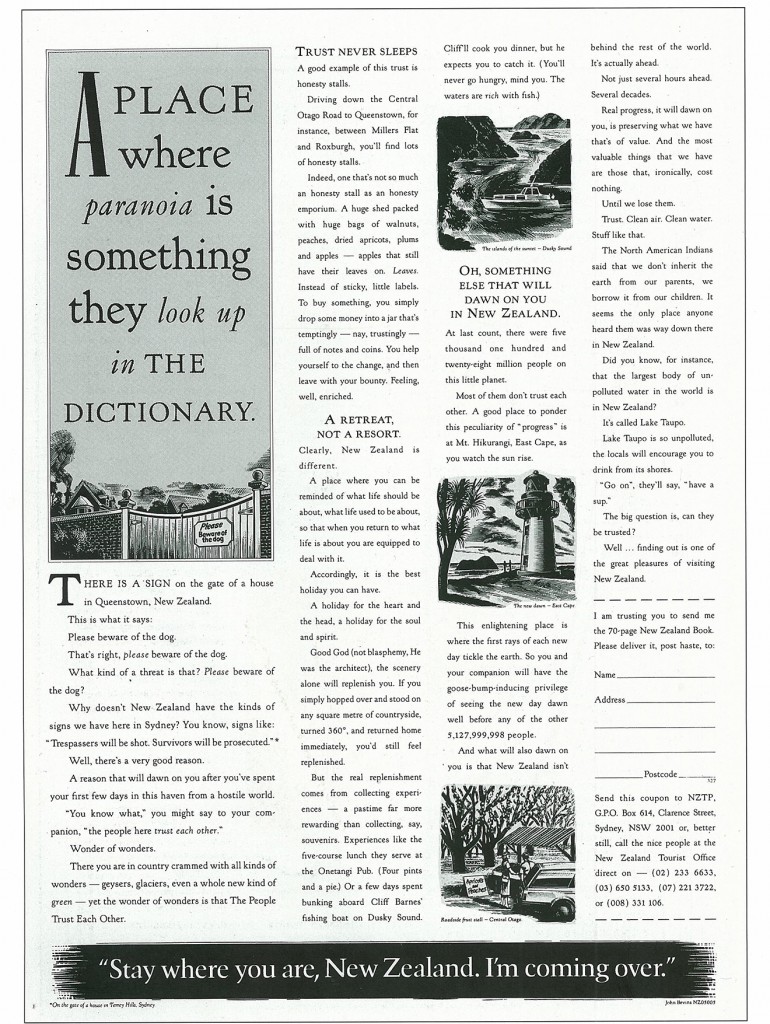 These three ads alone are mini masterclasses in developing an attitude and discipline that lead to you writing great copy. Especially when you’re writing long-form copy. We’ve just looked at three of Bevins’ many mantras, now here’s John Bevins in his own words, published in The Copy Book: How some of the best advertising writers in the world write their advertising:

“If you don’t enjoy writing it, no one will enjoy reading it” is one of my mantras. The very first ad I had published as a junior copywriter, I really enjoyed writing. Masterfully art-directed, it featured an overweight man plonked in an armchair with his cup of coffee beside him. Behind him was his wife — surreptitiously slipping a Sweetex artificial sweetener into his drink. let him have it screamed the headline.

It appeared in the iconic Australian Women’s Weekly around 1970. The copy chief, Arthur Hankin, came up to my desk beaming as he slapped down the magazine. Every ad in that ad-saturated tome had been ranked by the then-standard Starch research method.

Congratulations, Hank said, you’ve achieved the lowest scoring ad I’ve ever seen. It would be many years before I got the confidence to practise — properly — my risky mantra. But once I did, I started to learn a lot more things that supplemented that early, vital lesson on self-indulgence and relevance (and having bad ideas).

While I can’t teach you to write copy, I can tell you what writing copy has taught me.

You can have bad ideas but you don’t, at least in my experience, “have” good ideas. Maybe once in your career, a good idea will fall serendipidously into your lap. One did a long time ago for me with an ad for a strange new product called Micro Word. The encyclopedia I was desperately grasping at fell open, revealing an idea that, once written up, got so much reaction it gave me the confidence to be a real copywriter.

“To be that, I learned, you have to hunt down ideas. If I’d have tried to “have” an idea for New Zealand Tourism, slavishly following the flawed brief from the market researcher — “Australians think New Zealand is sickeningly wholesome, so make it a little bit wicked” — I’d never have gone to Queenstown and wandered aimlessly around the back streets looking for… what? I had no idea. But I found it, screwed to a gate. It inspired a campaign for a country you could never make even a tad wicked, a campaign that achieved in months the result the client had expected would take years.

On countless occasions, copywriting has taught me to respectfully ignore briefs — good and bad. Bankers Trust wanted a tv campaign but were intrigued by the suggestion of a long copy print campaign with no pictures at all. One that sought this response: Gee, even their advertising makes me richer, I wonder what would happen if I gave them some of my money.

I learned how important great clients are, individuals like BT’s Sheenagh Stoke and Jan Mohr with open minds and open hearts, who would open their doors to a curious copywriter. Clients who would trust you to find their brand truth and then connect it in your own way to an essential human truth.

“Copywriting has taught me that you don’t write great ads, great ads write themselves. All you need to do is dig relentlessly for gems in the most unlikely of places. MBF had a screening mammogram clinic that they’d told no one about. It was worth investigating. Dr Joan Kroll, who ran the clinic, mentioned to me in passing a painting depicting breast cancer long before it was discovered by medicine. Professor Michael Baum, from the Rayne Institute in London, uses it in his lectures, she said. I called him up that night. Ah, Bathsheba at her Toilet, you know it of course, by Rembrandt? I didn’t, but once I saw it, and learned its story, I knew we had an ad.

Copywriting has taught me that branding is nothing to do with a big logo, or the brand name in the headline, or even mentioning the brand early in the copy. What it’s all about is there in the MBF ad. To my everlasting enlightenment that ad was also Starched. It too appeared in the ad-saturated Women’s Weekly, some 20 years later after the shameful Sweetex ad (the publishers had brought back the research technique). 83% of all women noted the MBF ad. It got the second highest Read Most score and 69% correctly attributed it to the right brand. All without any conventional ‘branding technique’. Bookings to the clinic increased by over 800%.

Copywriting has taught me that data like that, as boring and baffling as data can be to copywriters, is priceless because our job is to get results for our clients.

It’s taught me too these others mantras:

Spell it out and it’s out with the spell. (The reader’s imagination is as important as yours.)

It’s taught me that great clients and colleagues are crucial to great work, you never do it alone, and therefore you have to find the right agency.

Or start your own.

Next week’s copywriter will be the queen of conversational copy, the irrepressible Susie Henry.