How to write a hi fi communication brief: profiling the target audience.

The only way to learn writing is on the job

How to write a hi fi communication brief: identifying the key proposition.

In other words: what’s the story morning glory?

“What” being the operative word, because this phase of writing the Communication Brief pin-points the What to Say of the communication piece. It needs to be said plain and straight, no cleverness please, we’re not writing the headline yet.  That What To Say has to be clear, concise and touch on the truth of the context relevant to the subject. Imagine you’re about to walk through heavily guarded doors and into the Boss Of All Things’ office with 10 seconds to pitch your story. Ten seconds to encapsulate and captivate.

This is where the double-tricolon-parallel-phrase mantra, “clear, concise and compelling writing always begins with clear, precise and insightful thinking” holds it own. To get hundreds of words and figures of data and information down to one sentence … better still … 140 characters, is more often than not a distillation process of brewery proportions. And the more stakeholders involved the better. We can all suffer the process together in a bonding experience that will not only break down those private little political agendas but also bring us all onto the same page – The Communication Brief.

That one line is the key to global harmony in the office. It is also the key to starting-up the writer’s storytelling engine.

So we will do this with two case studies from my Copywriting in Action Group Project, Elements of Ingenuity: solutions toward climate adaptation. We will begin with the magic of mushrooms and make this post a mind altering experience for you. Then we will conclude with Earthwitness.com and hopefully get you to see how a genuine professional communicator identifies What To Say in order to proceed to the How To Say It phase.

The problem: plastic waste makes up over 25% of landfills throughout the world.

The opportunity: Mushrooms can do the same job as plastic and it’s 100% compostible, which means giving back 25% of precious land to the community and the economy.

The product: MycoBond, an organic adhesive (based on mycelium, a living, growing organism) turns agriwaste into a foam-like material for packaging and insulation.

The Facts/Stats/Virtues:
MycoBond uses a filamentous fungi to transform agricultural waste products into strong composite materials. Products include packaging, styrofoam substitute and the in-development Greensulate rigid insulation board for builders. All environmentally low-impact, 100 percent biodegradable and renewable, and part of a healthy ecosystem. Unlike other bio-plastics, MycoBond technology isn’t based on turning food or fuel crops into materials but using inedible crop waste to grow products. MycoBond materials are literally grown from agricultural byproducts and mycelium, a fungal network of threadlike cells (like the “roots” of mushrooms). In 5 – 7 days, in the dark, with no watering, and no petrochemical inputs, the mycelium digests the agricultural byproducts, binding them into a beautiful structural material. The mycelium acts like a natural, self assembling glue. Requires less energy to create than synthetics like foam, because they’re quite literally grown. Can be home-composted or even used as garden mulch. Three principles govern better materials: 1) they should be able to be created almost anywhere on the planet. 2) they should require considerably less energy to produce than current materials and 3) they should be able to be disposed of by nature’s open-source recycling system.

The Key Proposition? Here are just some of the better one liners class participants came up with in what was a two hour learning experience in distilling all the information into a 10 second pitch-like one-liner:

MycoBond is the environmentally friendly alternative to plastic, reducing landfills by 25% (maybe but not convinced)

MycoBond is environmentally low-impact, 100% biodegradable and renewable, and part of a healthy ecosystem (too many ideas competing with each other)

MycoBond plastic requires less energy to create than synthetics like foam, because they’re quite literally grown (useful as key point in the body copy)

And so on … there were about another half-a-dozen along the same lines as all of the above. They were all correct. They were all factual. They were all benefit-focused. But none of them carried the seed of a story that you could pitch to an attention-deficit editor/creative director and point the writer in a clear narrative direction. This is when some serious clear, concise and most importantly, insightful thinking had to kick in like a 50 metre goal-on-the-run by a Nick Del Santo. And so, as always in Copywriting in Action, we kept on digging and came up with this little nugget of gold:

That’s 127 characters (with spaces). The reality and the possibility in one neat, forward moving line that makes the benefit as real as the current reality. How To Say It  was textually and visually articulated with a before and after scenario:

The problem: 1) the top down approach to climate change is way too slow and 2) most people don’t believe in climate change unless they can see it with their own eyes.

The opportunity: 1) a grassroots bottom up approach is literally in our hands in the form of a mobile phone and 2) build a website that shows climate change all over the world.

The product: Earth Witness Website: A Web portal giving everyday citizens a chance to play a role in the protection of the planet.

The facts/stats/virtues: camera phones would be fundamental to the project. And for a lot of us, they’re as close as we have yet to always-on, widely available information tools. Open-source hardware hackers have come up with multiple models for usable, Linux-based mobile phones, and the Earth Phone could spin off from this kind of project. At the other end of the network, there’d be a server for people to send photos and messages to, accessible over the Web, combining a photo-sharing service, social networking platforms and a collaborative filtering system. The online part of the Earth Witness project would be created by the users, working together and working openly. That’s enough right there to start to build a compelling chronicle of what’s now happening to our planet. This site could also serve as a collection spot for all sorts of data about conditions around the planet picked up by atmospheric sensors attached to cell phone that could measure temperature, CO2 or methane levels, and the presence of some biotoxins. All of this data could be mashed up with online maps for easy viewing and analysis. The impact of open-access online maps has been phenomenal. Earth Witness would link what you see with what millions of other people see around the world. Mobile phones puts us all at the front line of environmental protection.

The Key Proposition? Here are just some of the better one liners class participants came up with in what was yet another two hour learning experience in distilling all the information into a 10 second pitch-like one-liner:

Everybody can prove climate change is real with their smart phone (now we’re onto something, but it’s not there yet)

Earthwitness.com proves to the whole world that climate change is real and enables us all to take action (yes, but can we simplify)

Seeing is believing (yes, but we over-simplified to the point of simplistic)

We were starting to get to a potential story but it was not being articulated with enough accuracy and precision. The last three one-liners had the raw material, and participants were encouraged to merge the thoughts into a streamline of meaning:

Seeing is believing climate change is real (Yes! But that’s half the story. The website also shows the ingenious climate adaptation solutions that are out there)

The Key Proposition: Seeing is believing that climate change is real and climate adaptation solutions are real too. 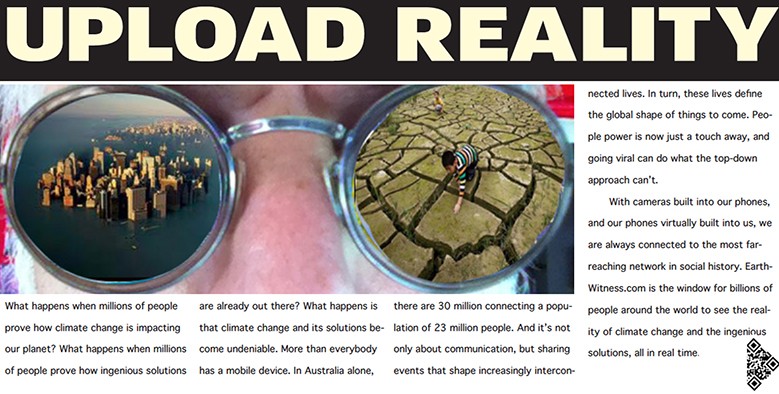 One streamlined and silky line of just 94 characters (with spaces). How To Say It  was textually and visually articulated as a two sequential spreads:

In 59 characters of conclusion, everything has a story and it all begins with What To Say.

~ These artworks are purely hypothetical and created for educational purposes only ~